For Women’s History Month, CommCreative’s own Joanna Bittle sparks an important conversation with Owner of Trillium Brewing Company, Esther Tetreault. Find out how Esther made her mark on a male-dominated industry and why she attributes a lot of that success to a steadfast value system. 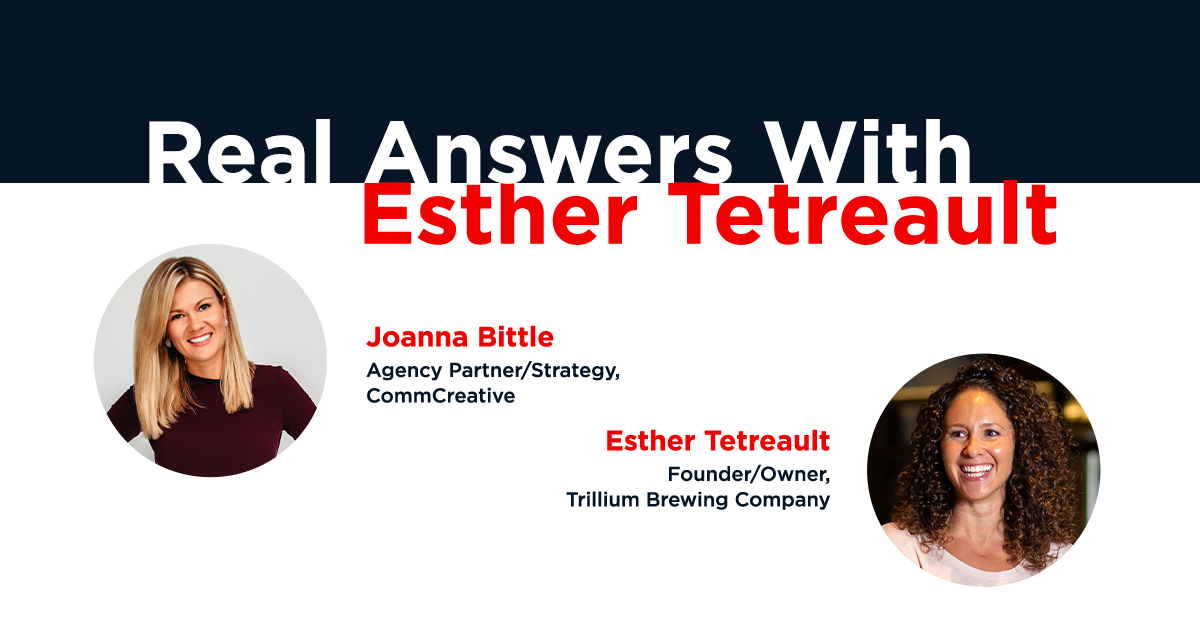 For Women’s History Month, CommCreative’s own Joanna Bittle sparks an important conversation with Owner of Trillium Brewing Company, Esther Tetreault. Find out how Esther made her mark on a male-dominated industry and why she attributes a lot of that success to a steadfast value system.

Tell me about the genesis of Trillium. How did you go from business school to making beer?

Since graduating from business school, my career has been both entrepreneurial as well as passion-driven. I worked in travel, launched a successful fitness business and started Trillium with my husband. The growth curve for Trillium has been steep, and it began as an idea before our wedding in 2009. At that time, JC was actively homebrewing while working full time in clinical trial management, and I was running my own business. We coupled his creativity and passion for beer with my business background to establish the vision for Trillium, a vision we’re still realizing to this day.

We opened our original location in March of 2013 on Congress Street in Boston and, fueled by demand, quickly expanded to a larger production facility in Canton in 2015. Two short years later, we established the first beer garden in the city on the Rose Kennedy Greenway, helping pave the way for others to follow. Our founding vision included a restaurant. In 2018, we were able to relocate to our original Boston neighborhood of Fort Point and realize that goal with the opening of our flagship restaurant, brewery and taproom on Thomson Place. Since then, we've continued Trillium's expansion: we purchased a farm in North Stonington, CT, in 2018 where we are actively growing vegetables for our culinary program; we opened our Fenway greenhouse-inspired taproom in 2019, and we are currently working toward opening our largest project to date: a new 500-seat restaurant, brewery and taproom in Canton.

Do you view this as a male-dominated industry? Do you feel that as a woman in this industry, you are driving change?

Yes, I think that beer, in general, is not only a male but a white male-dominated industry. But this is not unique – it’s not only craft beer that is white male-dominated – you could say the same thing about so many industries. I’m fortunate, for I’ve never felt or necessarily experienced discrimination for being a woman in this field, but I do not necessarily consider that to be the norm. I recognize the lack of diversity in this field and actively speak out to empower and encourage more women to get involved in craft beer.

Can you talk a little bit about how Trillium has evolved since the start of the pandemic?

I mean, the bad things are obvious, but there was a lot of good as well. We’ve been fortunate that breweries are considered essential businesses, as we’ve still been able to produce, package and sell beer, albeit in a far more limited fashion. Staff and guest safety is paramount to us, and, like most hospitality-based businesses, we needed to brainstorm, problem-solve and pivot. We launched a home delivery service, contactless curbside pickup and on-site experiences. And most recently, we began shipping beer to our fans out of state via UPS.

Can you talk about your value system and your philosophy behind hiring?

Regardless of the position, our goal is to find the best person. We never focus on female versus male or a specific demographic box; our desire is simply to employ like-minded, ambitious and talented people that help us achieve our goals. We prioritize ongoing recruitment, training and advancement and have established programs throughout our organization at all levels to help people achieve their career goals.

Tell me about scaling, keeping culture going, your value system, and the brand. What’s your secret?

There is no secret. There are certainly challenges and opportunities. For example, when we first started, we were actively engaged in the day-to-day of the business. I physically did all of our deliveries. I was literally putting kegs in my kids’ car seats to bring beer to restaurants. I was working retail, sometimes with a baby strapped to me, and JC was brewing. We were there on the ground, working shoulder to shoulder with our team, who, for a startup, is like family. We have maintained our culture because we have invested in people, and it’s been because of these people that we have had a strong team that focuses on values.

As you’re blowing up as a company, do you see a problem with staying authentic to who you are? That idea of being a craft product and company?

That is a clear no. Craft for us is not just the definition or distinction; it is who we are. We think of craft as creativity, artisanship, authenticity, education, exploration and inspiration. Craft, for us, is more of a broad definition of the word than the number of barrels that we produce or our physical location. So again, those are all part of our value system, and that’s what drives us. I don’t see that changing with growth, for it simply creates more opportunities and more access to do cool and inspiring things.

Is there anything I didn’t ask you that you would like to add?

We’re talking about being a female entrepreneur, just a woman in business. I, personally, like to focus on opportunity versus oppression. Look for the opportunity; don’t hold yourself back. Don’t categorize yourself as a woman in anything. Be the best at what you are, and don’t mentally hold yourself back or put constraints around the value that you can bring. I’m not willing to give up. I work hard, and I don’t put any boxes around myself. Focus inward, not outward, and hopefully, you’ll find something that feels authentic to you.